B.C. Liberals are calling for a state of emergency, as Feds bring in supports

The largest in the Prince George Fire Centre is the Chilako fire, discovered on July 1. It is burning at an estimated 1,000 hectares and was caused by lightning.

BC Wildfire Service says crews are engaged in indirect suppression efforts because of the changing fire behaviour. There are 55 firefighters, 4 helicopters, and 26 pieces of heavy equipment.

The second-largest is the Tentfire Creek fire near Murray Forest Service Road burning at approximately 715 hectares. It was also caused by lightning and discovered on July 1.

BC Wildfire Service says contingency guard has been completed. Crews and equipment are working to establish a fireguard on the west flank and one on the east flank of the fire and fire guards are connecting to Murray Forest Service Road to utilize existing road infrastructure.

The third wildfire of note is the Cutoff Creek Fire 2km north of Big Bend Arm.  Discovered on July 2, the fire was caused by lightning and is estimated at 600 hectares. 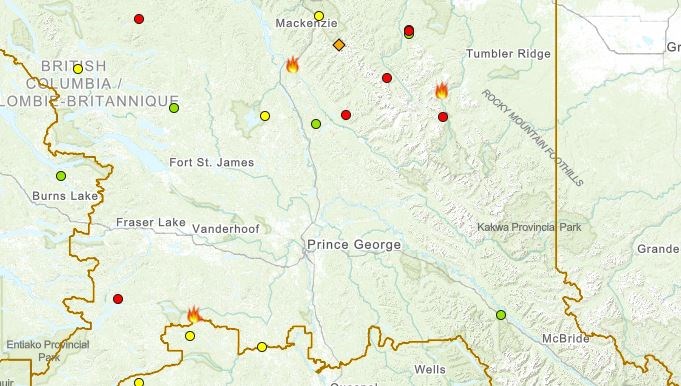 Wildfires of Note in the Prince George Fire Centre as of July 5, 2021. . By BC Wildfire Service

Smokey skies may also be expected in Prince George soon as there are also currently five wildfires of note in the Cariboo Fire Centre and five more in the Kamloops Fire Centre.

On Sunday, July 4, B.C. Wildfire Service's Cliff Chapman said 100 out-of-province personnel are due to arrive in B.C. to be deployed where they are needed, as the province battles nearly 200 wildfires.

The Canadian government is moving to stage more than 350 soldiers and tactical airlift capabilities out of Edmonton to support firefighters in B.C.

A forward operating base will house two Chinook medium-lift helicopters, one Hercules transport aircraft, and three Griffin utility helicopters already at a Canadian Forces base in the Alberta capital.

The aircraft will provide tactical airlift capabilities to move firefighters and equipment in and out of fires across B.C., while the soldiers will be made ready to support ground crews as necessary.

The BC Wildfire Service says there are roughly 3,000 firefighters battling blazes across the province, including fires that devastated the town of Lytton, nearly wiping it off the map and scattering its residents.

The B.C. Liberals have also called for John Horgan and the NDP government to enact a provincial State of Emergency.

“We’ve seen how devastating and quickly these fires can move. It’s vital that B.C. is ready before more fires spark,” said MLA Mike Morris, BC Liberal Critic for Public Safety.

“A provincial State of Emergency provides certainty that resources will be available to those on the ground and in need. For the sake of all communities facing wildfires right now, John Horgan cannot delay this important call any longer.”

The province’s wildfire season began after B.C. experienced a record-breaking heatwave that saw temperature soar well above 40 C and overwhelmed many emergency services and contributed to the deaths of over 700 people.

Current information on wildfires in B.C. can be found on the BC Wildfire Dashboard and EmergencyInfoBC.

Air Canada pilot snaps photos of devastating Lytton wildfire from above
Jul 5, 2021 10:12 AM

BC Wildfire Service crews find litter of puppies and mom safe in Lytton
Jul 4, 2021 9:57 AM

Firefighters from other provinces and military prepare to help battle BC blazes
Jul 4, 2021 5:03 PM