This striking image shows the 'duality of Vancouver weather' (PHOTO)

It can be rainy one minute and sunny the next.

Have you ever been on the phone with a pal complaining about the lousy weather in Vancouver only to have them tell you it is gloriously sunny where they are in town?

While people often think of weather on a large scale, weather events are often highly localized and only impact a portion of the city.

"The weather pattern over the province right now is we've got this upper-level trough which is creating this unstable air mass over the majority of B.C.," she explained.

In this type of weather pattern, Erven noted that the city may see a "showery weather pattern" with dark angry-looking clouds affecting one neighbourhood and then bright sunshine and warm temperatures in an adjacent area.

"It's quite a small scale feature and that's what causes this dynamic weather in Vancouver."

"The duality of Vancouver weather."

Jared Tan is originally from Mississauga, Ontario and moved to Vancouver three years ago. He told V.I.A. that he was showing a few friends around the city when he started at the University of British Columbia last month.

When the group was visiting the Vancouver waterfront, it started raining. However, Tan decided to stick around and snap an image of a striking weather pattern he observed.

"As soon as we got to the waterfront, it started raining," he explained. "Since we had made the effort to get out there, we stood on the rocks in the rain which is when I took the shot." 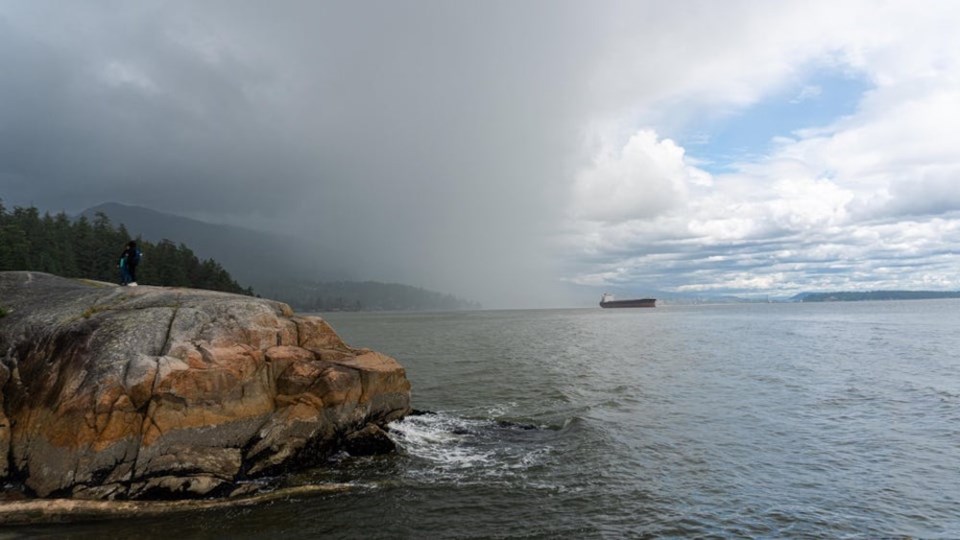 Since Tan shared the striking snap on Reddit, it has been up-voted over a staggering 2,500 times.

Erven notes that the grey mass extending down to the water in the image is a rain shower. "So that's precipitation over the land that's just to the left of the tank."

The "parent cloud" of the shower is located just above the hillside, she said. "It is a perfect example. You can see the extent of the showers hitting a very localized area of the coast.

"And then adjacent to it you've got a pocket of blue skies and some sun making its way down to the surface and drying conditions just to the right."

Looking forward to spending some time at the beach, in the woods or going on hikes?

While it's difficult to know how much rain Metro Vancouver will see this summer, Canada's national weather forecaster says the region will likely see above-average temperatures.

"It looks like we have a pretty decent chance of getting above-average temperatures this summer," he said. "The likelihood is looking pretty good."

Find out just how hot it is expected to be in Metro Vancouver with the full summer scoop.

Thunderstruck: Here's why epic thunderstorms are so rare in Vancouver
May 19, 2021 4:01 PM