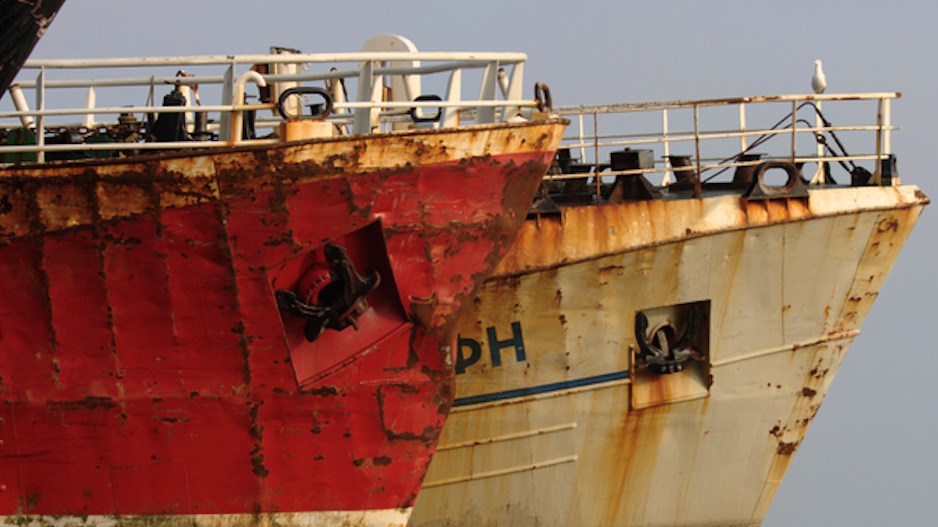 BC Supreme Court has issued an injunction to keep a company from dismantling old ships in the Fraser River.

“I find that they are trespassers in the water lot, Justice Carla Forth said. “At no time did the Mountain defendants have authorization from VFPA [Vancouver Fraser Port Authority] to set up a ship breaking business in the water lot.”

Valley had leased a water lot from the port authority, subleasing it to Mountain. Rowand is the latter’s CEO. Mountain began dismantling and deconstructing old ships on the lot.

However, VFPA had not authorized the ship-breaking operation, and terminated the lease in April 2019. The authority believes a breaking operation in water is environmentally dangerous and should only be permitted in a dry dock or upland location.

The lot is about 1.8 kilometres downriver of the Port Mann Bridge.

“Of some significance, running underneath the water lot is a submerged pipeline carrying oil,” Forth said. “It is operated by Kinder Morgan and known as the Old Trans Mountain Tar Sands Pipeline.”

That’s the controversial pipeline bought by the federal government in 2018.

Forth said Valley subleased the lot to Mountain in 2017 to Mountain, which “then commenced a ship breaking and demolition operation within the Water Lot. It brought several barges and ships, including dredgers, fishing trawlers, former warships, and a former Alaskan State Ferry, into the Water Lot. This was done without the approval or permission of VFPA and in breach of the lease.”

VFPA became aware of the operation in 2018 and ordered a halt except for emergency work – including salvage of a ship which remains submerged.

Issues continued through 2020 with Mountain saying it was looking for other locations for vessels. VFPA posted ‘no trespassing’ signs.

Forth said once the lease was terminated, there was no legal reason for the defendants to remain on the lot.