The City of Vancouver is not meeting its targets for the number of purpose-built rental housing units and townhouses approved in the last two years.

The good news delivered April 2 from city staff charged with creating more homes in Vancouver to meet the needs of residents at various incomes is that 15,404 units were approved in the last two years.

The less encouraging news is the city is not meeting its targets for the number of purpose-built rental housing units and townhouses approved in that span of time. 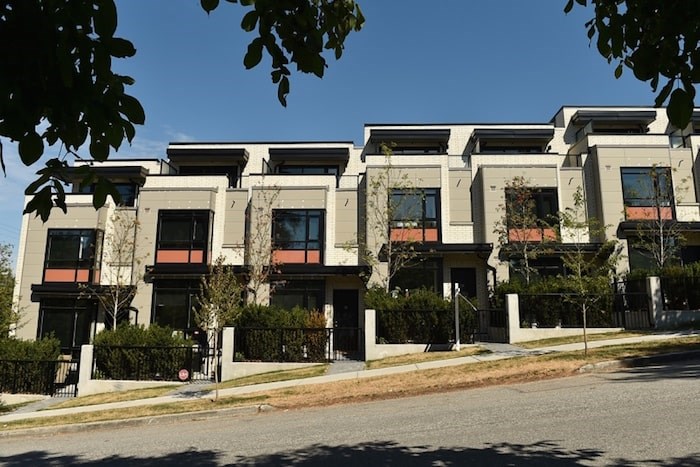 The City of Vancouver’s 10-year housing strategy calls for the creation of 5,000 townhouses by 2027. So far, only 275 are in the works. Photo Dan Toulgoet

The city is also finding it a challenge to create a supply of housing geared at households earning $80,000 per year or less, according to housing staff who presented a progress report on the Housing Vancouver strategy to city council Tuesday.

That challenge is exacerbated by census data that shows the median total income of Vancouver households in 2015 was $72,662 in a city where more than 50 per cent of residents are renters.

“We actually set a quite high target for the delivery of rental housing knowing that the demand for rental is so high, so we knew it was going to be a challenging target to hit,” said Dan Garrison, the city’s assistant director of housing policy, said after the presentation.

The target set by the city is to have 20,000 purpose-built rental units approved by 2027. The number of units approved since 2017 is 1,851, which equates to roughly nine per cent of the overall goal.

The report shows the city was unable to approve any purpose-built rental housing last year for households earning $30,000 to $50,000 per year, despite a target of creating 250 units in 2018.

Garrison said the high cost of land and developers choosing to build market condominiums for a better return on their investment are hampering efforts to create more rental housing.

The typical minimum return in profit for a developer on a condo project is in the 15 per cent range, whereas a rental development yields closer to five or six per cent, Garrison added.

The city made recent zoning changes in the Cambie corridor, where Garrison said the city expects to see an increase in townhouses in the next few years.

Opening up the city for more townhouses is a discussion that will occur as the city moves ahead with consultation regarding a city-wide plan, he said, noting the type of housing is more affordable than single-family homes and typically built with enough room for families.

In the meantime, the city continues to look at ways to provide incentives for developers to build more rental housing, with various programs underway to do that.

Waiving development cost levies, not requiring as many parking spots in a development and allowing more density in a project are some of those incentives.

The Moderate Income Rental Housing Program, which aims to create rental homes for singles and families earning between $30,000 and $80,000, is one of the city’s initiatives.

So far, four of 20 proposals are in the application phase.

Jon Stovell, president of Reliance Properties and chairperson of the Urban Development Institute, said he was disappointed to learn the city wasn’t meeting its goals for purpose-built rental housing and townhouses.

“I wouldn’t say the municipalities are completely responsible for that, but they’re a big part of it,” Stovell told the Courier by telephone.

Stovell said the city has created uncertainty for developers wanting to build rental housing. He cited a motion that was to go before council Wednesday that requests the city suspend waiving development cost levies for rental projects under the city’s Rental 100 program.

Those levies can be significant, with more than a $600,000 saving for developers in some of the projects built under the program, which was created to provide incentives to get rental housing built.

“So one day after they were presented with a report that they’re under-scoring on rental, they’re considering a motion to stop new rental applications,” he said. “To us, this is just Kafkaesque. We can’t understand the mixed signals coming out of government.”

Stovell said such “meddling” with programs creates a chill in the industry and doesn’t give confidence to the banks and investment partners to proceed with rental projects.

Under city hall’s previous administration, planning changes in the lower Davie Street neighbourhood gave developers certainty on what could and couldn’t be developed in the area.

Stovell said he was given the choice to build a market condo tower at 90 feet tall, or a 220-foot rental tower. He chose the rental tower, which is currently under development at Davie and Bidwell and will provide 108 units.

He said Reliance’s project is one of five rental projects in the 1600-block of Davie Street. When each building is finished, he estimated that will create another 600 units of rental housing downtown.

“That shows you what can happen when the city just gets out of the way and creates a clear regulatory framework that encourages private capital to go in the direction of rental instead of condo,” he said, noting he paid development cost levies on the project.

Asked how much a unit will rent for when completed, Stovell said he wouldn’t know until all the projects go on the market and compete for tenants.

Stovell emphasized increase height and density is crucial to buy-in from developers interested in building rental housing. As for townhouses, he said the development industry has complained for years that the city has been slow to change zoning to allow the type of housing.

He acknowledged it was “a thorny political issue,” noting long-established single-family home neighbourhoods would likely push back against moves to bring in townhouses.

Mayor Kennedy Stewart praised city staff for their work on making steady progress towards delivering 72,000 new housing units by 2027. The goal is to have nearly 50 per cent of all units geared to households earning less than $80,000 per year.

But he told reporters Tuesday he was worried the city was not meeting its target of providing housing for people on household incomes of $80,000 per year or less, particularly those in the $15,000 to $30,000 range.

The mayor said people in that category are minimum wage earners working in the service industry and others who just entered the job market.

He noted the city’s progress report shows almost all housing available to people earning less than $30,000 is provided by government, including the 606 temporary modular housing units built across the city in the past two years.

Of the roughly 320,000 housing units in Vancouver, Stewart said 92 per cent are privately owned. The remaining eight per cent are owned by government, which illustrates how Vancouver’s housing economy is driven by the market.

“If you make minimum wage in this city, it’s almost impossible for you to enter into the housing rental market,” Stewart said. “We won’t be able to address it without considerable investment from senior levels of government.”

Of the 15,404 housing units created in Vancouver over the past two years, the majority—8,338—were market condominiums.

That statistic is consistent with the city’s data that shows it is exceeding its targets to provide more housing for households earning between $80,000 and $150,000 per year.

The city also approved 3,640 social and supportive homes and 1,300 laneway homes, which were in addition to the 1,851 purpose-built rental homes and 275 townhouses.

The new housing comes as the city’s vacancy rate remains below one per cent and housing advocates continue to call for better protections for renters facing evictions connected to renovations.

The benchmark price for a single-family home on the east side of the city is still above $1 million, and a condominium in the same area goes for more than $500,000, according to city staff.

Homelessness, as the city’s annual count showed last year, is also at an all-time high.

The Housing Vancouver progress report, including a data book, is available at Vancouver.ca.