Trans Mountain pipeline work was getting underway in the Stoney Creek area of Burnaby when workers were confronted by protesters blocking access to the site
Jan 18, 2021 3:04 PM By: Dustin Godfrey 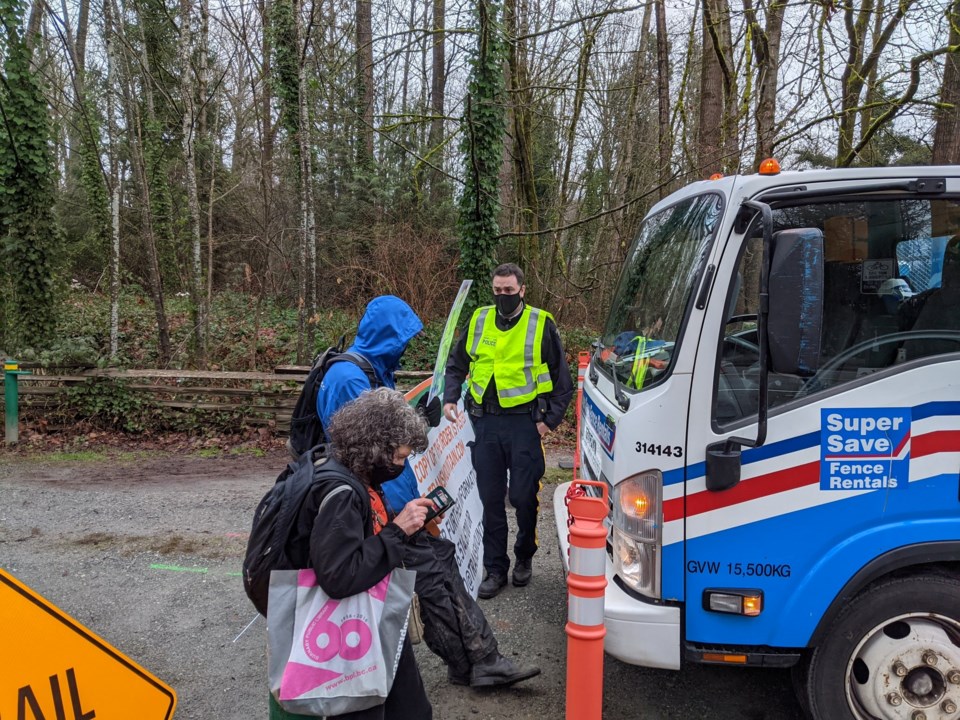 On Saturday, a handful of protesters showed up at the entrance to the Stoney Creek trails and blocked trucks from entering the site to work on the pipeline expansion, which was beginning in the area.

Local Twitter account @BurnabyClimate began tweeting photos from the demonstration at 7 a.m. on Saturday, with one photo showing up to five people blocking the path, in the 8000-block of Government Street, near Burnaby Lake. Just about three hours later, @BurnabyClimate tweeted that a person, Maxine Kaufman-Lacusta, was arrested.

In a news release, Burnaby RCMP said demonstrators were read a court injunction, which bars people from obstructing access to TMX worksites. The protesters were given a chance to leave or face arrest, according to the news release.

“Despite being asked a number of times to leave, this demonstrator failed to do so and was arrested,” reads the RCMP release. “The demonstrator has since been released and will appear in court over the coming weeks. Burnaby RCMP would like to remind demonstrators that they have a right to lawful, peaceful and safe protest and the companies have a right to complete their work. Burnaby RCMP is working hard to ensure that these rights are respected and everyone is kept safe.”

Police have the ability to discern how and when to enforce the injunction, Burnaby RCMP said, adding the “primary concerns of the police are public safety, police officer safety, and preservation of the rights of demonstrators to their freedoms of expression, association and mobility, as guaranteed by the Canadian Charter of Rights and Freedoms.”

RCMP said police will continue to monitor the demonstrations, which have increased in frequency in recent months. For most of 2020, opponents of the pipeline had been relatively quiet, but protests began in earnest again in August, when protesters occupied trees in the Brunette River area.

That occupation continued until last month, and was followed by another occupation in the same area. In November, more active demonstrations also continued, with protesters blocking train tracks, blocking roads and locking onto trees to block work on the project.

At least one other person – Zain Haq, a spokesperson for the local Extinction Rebellion chapter – has been arrested in response to the protests, with several others served fines.

Haq told the NOW last year the demonstrations are ramping up again in a last-ditch attempt to halt the pipeline after Indigenous and environmental legal battles against the project were resolved in favour of Trans Mountain.

The demonstration came shortly before news broke that U.S. President-elect Joe Biden will be cancelling permits for the Keystone XL pipeline, intended to transport Alberta bitumen south of the border.

The move will likely increase pressure from Canadian oil proponents on completing the Trans Mountain expansion. Proponents say completing a pipeline is vital to reviving Alberta’s fossil fuel industry, which has taken several major hits in the latter half of the 2010s.

Opponents, however, contend that adding more pipelines will make achieving Canada’s climate goals impossible, risking severe climate change that would increase the frequency and intensity of deadly storms, wildfires and droughts in the coming decades.