A man and his dog are safe after an evening of cliff jumping suddenly turned into a rescue mission Friday night.
Ben Bengtson Sep 7, 2019 3:23 PM

A man and his dog are safe after an evening of cliff jumping suddenly turned into a rescue mission Friday night. 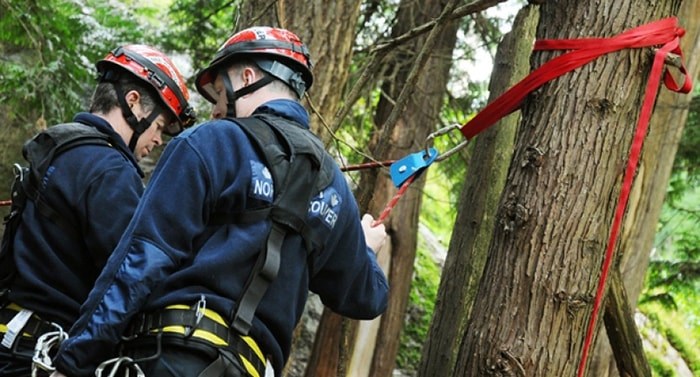 District of North Vancouver Fire and Rescue Services were called out to Lynn Canyon Suspension Bridge at approximately 7 p.m. with reports that a man in his late 30s, along with his 100-pound pit bull, were stuck on a sandbar just below the suspension bridge.

The man and a friend had been taking turns cliff jumping from Lynn Canyon, trading off looking after the dog, when the incident occurred, according to assistant fire chief David Dales.

“Basically, what they were doing is one would cliff jump and the other one would look after the dog. Well, the one guy cliff jumped and the dog went with him – the dog followed him,” said Dales. “They floated into right underneath the Lynn Canyon Suspension Bridge. There’s a sandbar and they were stuck.”

It took about an hour for emergency responders to complete a vertical technical rescue to retrieve the stuck man and his dog, according to Dales, noting the added challenge of conducting the rescue in the dark.

“We inserted firefighters using the left vertical route and secured the dog in a harness and basically did a low-angle rescue until we got to another float spot and then we kept climbing up over boulders and rocks to get the dog out,” said Dales.

Both the man and his dog were fine, noted Dales, but both were “extremely wet and cold.”

Dales added that with summer drawing to a close and it getting darker earlier, it’s especially important for people to make sure they’re prepared whenever they head out for any outdoor excursion or adventure.

“The public message is: cliff jumping is dangerous,” he said. “Avoid it at all times.”

What you should know about Bob Lewis, the prolific builder of West Coast Modern homes
Dec 8, 2022 11:39 AM