Have you seen the Snug Cove terminal concept plan?

BC Ferries is in the early design stages of a new Snug Cove terminal with a draft terminal concept released a couple of weeks ago. The plan is open for community comment until Jan. 29.
Jan 18, 2021 9:34 AM By: Bronwyn Beairsto

BC Ferries is in the early design stages of a new Snug Cove terminal with a draft terminal concept released a couple of weeks ago. The plan is open for community comment until Jan. 29. 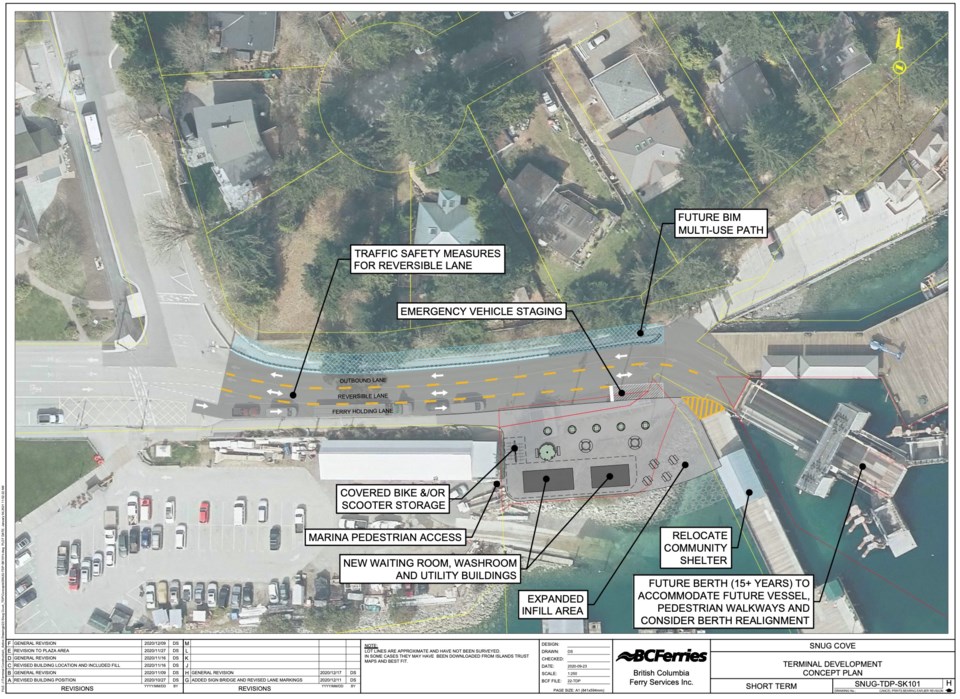 The washroom and waiting room are slated for development in the near term, COVID-19 and its effect on BC Ferries' capital projects means that timing and scope is to be determined, wrote BC Ferries’ manager of community engagement Darin Guenette in an email.

However, the concept doesn’t currently accommodate bus drop off next to the berth — a long-sought request from islanders, especially for accessibility reasons.

“We found we must either widen into the hillside, or create a costly over-water area [more pier-like infrastructure] to give buses the room they need to turn around, to avoid conflict between buses and pedestrian traffic, and to avoid conflict between buses and vehicle traffic while loading and unloading,” says the BC Ferries website. Due to the “significant challenges,” of transit next to the berth, the corporation has excluded it from this plan but says it’s willing to discuss options with  Bowen Island Municipality, Translink and First Transit.

In the public responses to the concept plan, the most common request is for no more illuminated signage and to remove the sign that is there now.

"The [terminal development plan] engagement process has heard this concern from many so far," said Guenette. "The TDP will review this item and discuss options with the municipality for both the redevelopment plan as well as potential short term measures."

Heritage register established for Bowen Island and other muni morsels
Jan 18, 2021 9:03 AM

Bowen could be doing away with the island-wide pot selling prohibition
Jan 15, 2021 1:15 PM

Here's what Vancouver Coastal Health has to say about COVID-19 transmission in schools
Jan 14, 2021 12:28 PM
Comments