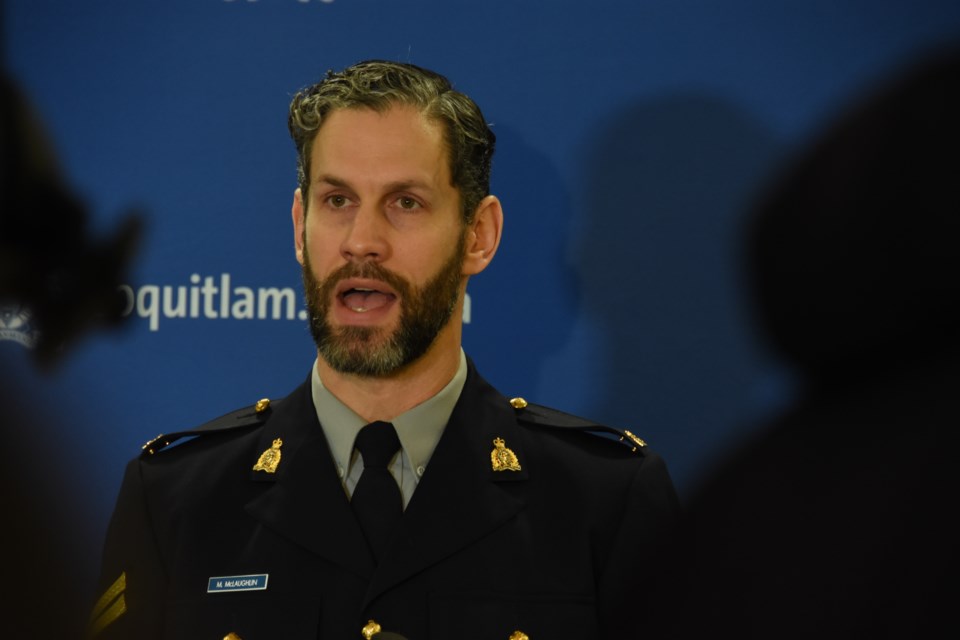 Coquitlam RCMP spokesperson Cpl. Michael McLaughlin speaks at a press conference following the announcement of criminal charges against Kinsight Community Society and one of its caregivers.STEFAN LABBÉ/THE TRI-CITY NEWS

A charge against a Coquitlam non-profit for failing to provide the necessities of life in the starvation death of a woman with down syndrome has been stayed, according to the BC Prosecution Service.

Revelations that the Kinsight Community Society would be implicated in charges in the death of Florence Girard were revealed by Coquitlam RCMP in January. Officers arrived at the Port Coquitlam home of Girard’s caretaker, Astrid Dahl, Oct. 13, 2018, only to find the starved and malnourished body of the disabled woman.

After a 15-month investigation involving 20 officers, the BC Prosecution Service approved charges against the caregiver and non-profit on Jan. 27.

Seven months later, on Sept. 9, the charge against Kinsight Community Society was stayed after Crown Counsel determined that the charge assessment standard was no longer met.

Crown Counsel proceeds with charges when its satisfied that the gathered evidence in an investigation will lead to a “substantial likelihood of conviction” and that if so “that a prosecution is required in the public interest,” according to a spokesperson for the BC Prosecution Service.

“In this case the prosecutor concluded the test was no longer met and directed the stay of proceedings,” wrote BC Prosecution Service spokesperson Alisia Adams in an email.

At the time, Coquitlam RCMP spokesperson Michael McLaughlin said the charges against both Dahl and Kinsight related to failing to provide such things as as food, shelter, medical attention and protection from harm.

Kinsight, formerly the Simon Fraser Society for Community Living, is a long-running organization in the Tri-Cities that also serves New Westminster, Anmore and Belcarra.

Among the programs the organization provides are housing, employment, skill development and support for children, youth and adults with developmental disabilities. It provides housing for adults, including shared living, semi-independent living and staffed homes with ongoing support, according to the organization’s website.

In an email to the Tri-City News back in January, Kinsight’s director of adult services, Tess Huntly, wrote, “We were shocked and deeply saddened to learn of the passing of this individual.”

She also noted this is the first time in the organization’s 65-year history that the death of someone in their care has led to a police investigation and criminal charges.

McLaughlin said at the time there was no evidence to suggest that either Kinsight or Dahl have or are currently involved in abuse or criminally negligent behaviour beyond this one case.

But while the charge against Kinsight has now been stayed, the charges against Astrid Dahl have not changed.

Charged with criminal negligence causing death and failing to provide the  necessaries of life, she will appear in a Port Coquitlam court next week to determine a trial date.