Over the summer we have all been warned of the dangers of predators such as bears, cougars and coyotes that live amongst us and advised to keep our dogs on leash when walking on trails.
Sep 5, 2018 8:00 PM By: Joan Klucha 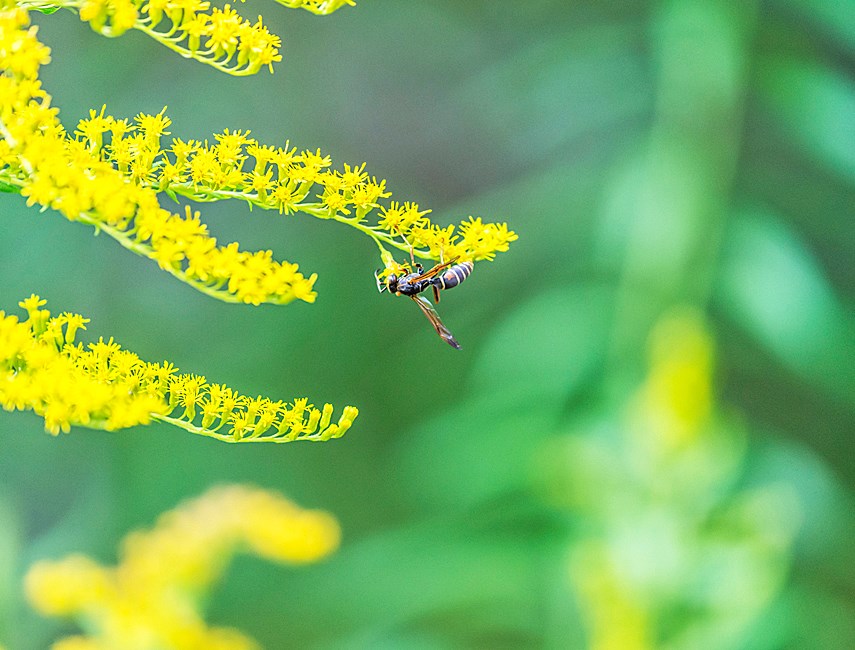 Over the summer we have all been warned of the dangers of predators such as bears, cougars and coyotes that live amongst us and advised to keep our dogs on leash when walking on trails.

But as the summer begins to wane and fall leaves dapple the ground there is another predator lurking in the midst that has the potential to cause harm to our canine companions. And unlike the large, fur-covered predators, these nasty spawn of the devil have wings and hide in areas where our dogs love to poke their noses around as they investigate their surroundings along a walk.

These demonic predators I speak of are . . . wasps.

And despite their tiny size, their bite is far worse than their buzz!

According to entomologists, horticulturists and avid gardeners alike, the reason wasps are so aggressive in the fall is because their hive is at peak capacity, filled to the brim with active wasps who are fighting for limited space and resources and this apparently makes them very angry.

Hmm, oddly that sounds like life on the Lower Mainland. Anyway, I digress.

Wasp nests can be hiding just about anywhere, overhead on tree branches, tucked into a shrub, clinging to tall sturdy grasses and below the surface of the earth.

All those places are potential sting zones as our dogs’ curiosity brings them within those areas on a daily basis. So it is inevitable that your dog will get stung and yes, it hurts your dog just as much as it hurts us to be stung.

In most cases dog owners can treat their dog’s sting at home. But depending on the severity of your dog’s reaction, you might have to make a trip to the vet because just like us humans, dogs can have an allergic reaction to those stings so it is best to be prepared for the worst-case scenario.

If you notice that your dog has been stung, watch your pet closely for signs of itchiness, hives, welts, and watery eyes. These would be considered mild reactions and depending on your comfort level can usually be treated at home.

But if you notice Fido beginning to have difficulty breathing or experiencing swollen eyes, his tongue turning blue, his gums turning white, vomiting, diarrhea or even collapse then don’t waste a moment and get to the vet ASAP because your dog is highly allergic and may die.

When treating your dog at home for a mild reaction to a wasp sting, Benadryl is what is recommended to give your dog. Now, it can’t just be any Benadryl, it has to have diphenhydramine as the active ingredient.

The medication cannot be mixed with any other pain medicine such as Tylenol, Advil or a cold and sinus medication that may have sleeping aids mixed in. It must be 100 per cent diphenhydramine.

Also: make sure it does not contain the sweetener xylitol!  Xylitol is highly toxic to dogs!

The dose you give your dog depends on their weight, so it is best to discuss this with your veterinarian ahead of time and be prepared. The typical dose is one to two milligrams per pound of body weight. For dogs who weigh less than 15 pounds it is best to use a liquid form of diphenhydramine rather than a pill.

If you do not have Benadryl and your pet’s reaction to the sting is mild, then dabbing apple cider vinegar or pure aloe gel to the sting site may reduce the effects of the sting.

Once you have treated your dog either at the vet or at home, don’t let your dog back out into the yard or near the area where it was stung.

Dogs, being highly curious creatures and, well, a bit silly, have been known to go back to a wasp nest to investigate further and try to figure out what all that fuss was about the first time, and as you can guess, get stung again.

This may sound humorous, but if your dog does receive repeated stings within a close amount of time, they have a greater chance of having a more rapid and greater allergic reaction to the stings, which could be fatal.

There is no way to tell ahead of time whether your dog is highly allergic to a sting or not. Unfortunately you find out the day they get stung. So be prepared, make sure you have diphenhydramine in your first aid kit and speak to your veterinarian about an EpiPen for your dog.

It may sound dramatic but it could save your dog’s life.

Joan Klucha has been working with dogs for more than 15 years in obedience and tracking as well as behavioural rehabilitation. She can be contacted at: k9kinship@gmail.com.