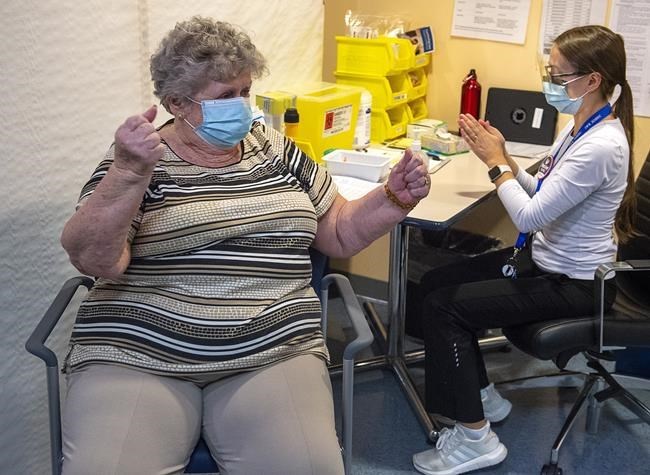 It's the first of several clinics planned across the province for that age group over the next month.

Alvena Poole, 83, and Bernice Brown, 82, were among the first of 500 people registered to get vaccinated at the IWK Health Centre clinic.

"You're good," Poole joked to registered nurse Allison Milley just after her shot was administered.

The clinic at the IWK Health Centre is to run through Thursday, with vaccinations by appointment for people who had been randomly selected and who live within an hour's drive of the hospital.

"Our first community clinic opened today at the IWK Health Centre and we will see more community clinics opening in the coming weeks in other areas of the province," Dr. Robert Strang, chief medical officer of health, said in a news release. "We continue to prioritize vaccinations for those who are most vulnerable and at highest risk."

Strang has said the clinic is a prototype that will serve as a test run for future community clinics across Nova Scotia. The plan is to open another 10 clinics next month for 48,000 people who will be mailed a letter informing them how to book an appointment.

The vaccination program will then expand to the next age group in descending order until everyone in the province is offered the chance to be immunized. The age groups will proceed in five-year blocks.

Future community clinics are to be held March 8 in Halifax, New Minas, Sydney and Truro; March 15 in Antigonish, Halifax and Yarmouth; and March 22 in Amherst, Bridgewater and Dartmouth.

To date, Nova Scotia reports administering 27,521 doses of either the Pfizer-BioNTech or Moderna vaccines, with 11,533 people having received a booster shot.

Last week, Strang said the province would stick to its methodical approach of administering two doses of vaccine because of the province's low infection numbers.

He said the province was to receive 10,530 doses of Pfizer-BioNTech vaccine last week, with half to be reserved for second doses. The shipment was slated for seven cold storage sites across the province, with six doses to be drawn from each vial of vaccine.

Meanwhile, the province reported one new case of COVID-19 on Monday and has 19 active reported infections. Health officials said the new case was identified in the Halifax area and involves a close contact of a previously reported case.