The race between vaccines and surging COVID-19 variants hit a new gear on Monday as more provinces announced they would expand access to the Oxford-AstraZeneca shot, and Ontario and Quebec partially closed their borders to slow the spread.
Apr 19, 2021 4:36 PM By: Canadian Press 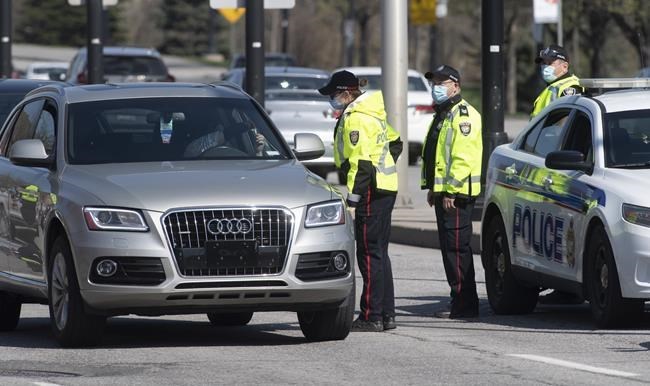 The race between vaccines and surging COVID-19 variants hit a new gear on Monday as more provinces announced they would expand access to the Oxford-AstraZeneca shot, and Ontario and Quebec partially closed their borders to slow the spread.

Manitoba, British Columbia and Quebec both said they would lower the minimum age of eligibility for the AstraZeneca shot, following on the heels of Alberta and Ontario.

Manitoba, B.C., Ontario, and Alberta have set the minimum age at 40, down from 55, while Quebec's public health director said the province would make an announcement soon on new eligible groups.

The National Advisory Committee on Immunization recommends offering the AstraZeneca shot to those 55 and over because of a slightly elevated risk of an extremely rare blood clot disorder.

Federal Health Minister Patty Hajdu, however, suggested on Sunday that new national recommendations were coming soon and reminded reporters that Health Canada has licensed the AstraZeneca shot for use in people over the age of 18.

Tom McMillan, a spokesman for Alberta Health, said the decision to offer the vaccine to younger people was based on health data along with concerns that vaccine hesitancy in older groups would slow the rollout.

"By opening up to (age) 40, we are balancing the evidence around safety as well as the goal of getting doses into people's arms as quickly as possible," McMillan said Monday.

He said the decision would mean hundreds of thousands more Albertans have a chance to be vaccinated more quickly.

In Ontario, which has become the epicentre for the virus in Canada, phones were buzzing with calls from people eager to get the shot, according to the head of the Ontario Pharmacists Association.

"They were getting calls so it seems to me that there is still a lot of demand," Justin Bates, the organization's CEO, said Monday.

Ontario and Quebec imposed new interprovincial travel restrictions on Monday in an effort to keep the transmission of more contagious variants at bay.

Going forward, travellers from Manitoba and Quebec cannot enter Ontario unless they live or work in the province, are transporting goods, or are travelling for health or compassionate reasons or to exercise an Aboriginal treaty right.

Quebec has enacted similar rules for its western border with Ontario and is requiring anyone returning to their primary residence from that province to isolate for 14 days unless they fall under an exception.

The province's public health director, Dr. Horacio Arruda, said he was discussing with his federal and provincial counterparts the possibility of limiting interprovincial and international air travel in light of the more contagious variants.

Prince Edward Island also imposed tightened border restrictions, announcing most non-resident travel to the Island from outside Atlantic Canada is being put on hold until at least May 17 to prevent imported COVID-19 cases.

The measures came as Ontario reported 4,447 new cases of COVID-19 amid worries the province's intensive care units are struggling to keep up with a growing number of extremely sick patients.

"I believe such a declaration, applied to Ontario, could help ensure a more co-ordinated delivery of vaccines to those who need them most, as well as enabling workers to prevent the spread by taking paid sick days and time off to get vaccinated," Singh wrote to Trudeau in a letter.

The prime minister has resisted previous suggestions to invoke the measure, stating that he preferred to let the provinces take the lead on fighting the virus.

The federal government announced Sunday it was working with provinces that have not been as hard hit, such as those in Atlantic Canada, to dispatch health-care workers to help in the Greater Toronto Area's struggling ICUs.

On Monday, spokespeople for the premiers of Nova Scotia and New Brunswick declined to announce firm commitments, saying health officials were still evaluating what resources they could spare.

Cases in both provinces rose on Monday, by 15 and nine cases, respectively.

Newfoundland and Labrador, on the other hand, said it would likely announce in the next 24 hours the details of a contingent that will include Dr. Allison Furey, wife of Premier Andrew Furey.

Ontario reported Monday morning it had administered another 67,000 vaccine doses, pushing Canada as a whole over the 10-million mark for doses administered.

About 9.1 million people in the country had received at least one dose as of Monday morning, including about 915,000 who have received both required doses.

Officials in Alberta said 1.17 million doses of all vaccines have been administered in the province, which has the highest rate of active COVID-19 cases in the country. There are more than 400 infections per 100,000 people.

B.C. also said it will impose travel restrictions to prevent movement outside of health regions as police set up roadside checks similar to those seen during the Christmas season, with more details expected to be announced on Friday.

Premier John Horgan says the government has been working with the tourism industry and B.C. Ferries to deter people from booking accommodation if they live outside their intended destination.