WINNIPEG — The Manitoba government is tightening some of its COVID-19 restrictions due to rising case numbers. Starting Tuesday, weddings, funerals and outdoor public gatherings will be capped at 10 people — down from 25.
Apr 19, 2021 12:55 PM By: Canadian Press 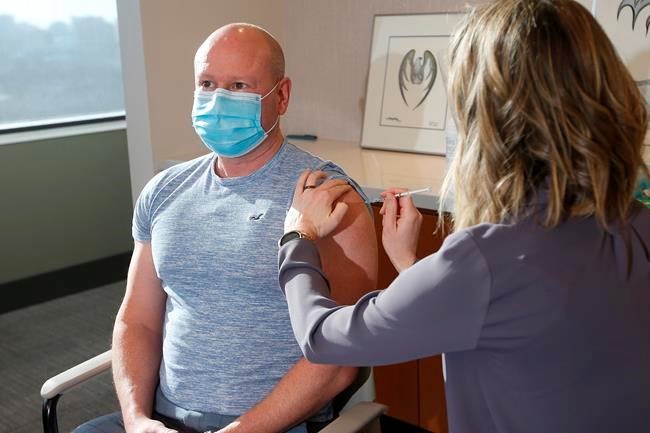 WINNIPEG — The Manitoba government is tightening some of its COVID-19 restrictions due to rising case numbers.

Another change will take effect Wednesday morning. Retail stores will have to drop the number of shoppers allowed inside to one-third capacity from half.

"We see that our (case) numbers are climbing, so we needed to do more," Dr. Brent Roussin, chief public health officer, said Monday.

"I do think, from a public-health perspective, this really is our last shot at reducing our numbers before we do need to move into more of a lockdown scenario. We cannot overwhelm our health-care system."

Health officials reported 108 new COVID-19 cases Monday and no additional deaths. Manitoba has had lower infection rates in recent months than other provinces west of the Maritimes, but daily case counts have risen in recent weeks.

The rise has been noticeable in younger age groups. Some cases among students and staff at schools in Gimli, a town of 2,000 people an hour's drive north of Winnipeg, prompted the regional school division to close three schools for the day Monday.

"There certainly is transmission that occurs there, but most of the transmission in that cohort is occurring outside of school — gatherings with friends, sleepovers, house parties, these types of things."

The province also expanded its vaccine eligibility Monday. The minimum age for Pfizer and Moderna vaccines, distributed through channels including mass vaccination centres, dropped by two years to 34 for First Nations people and 54 for others.

The eligibility for Oxford-AstraZeneca vaccines, administered through pharmacies and medical clinics, was reduced to anyone 40 years of age and older following similar moves on the weekend by Ontario and Alberta. Previously, it was only available to Manitobans 65 and over and people 55 to 64 with certain underlying medical conditions.

Health Canada has approved the vaccine for people under 55. But the National Advisory Committee on Immunization has recommended it only be offered to those 55 and older due to a potential slightly elevated risk of an extremely rare blood clot disorder in younger people receiving the shot.

There have been two cases of blood clots in Canada out of more than 700,000 doses of AstraZeneca given so far.

Premier Brian Pallister said the expanded vaccine eligibility and tightened restrictions will help Manitoba avoid the kind of surge in cases it saw in the fall, when it led all other provinces in daily infections per capita.

Oilsands producers step up anti-pandemic measures as outbreaks rise in region
May 10, 2021 1:59 PM