Kosovo voters choose a new parliament amid the pandemic

PRISTINA, Kosovo — Kosovo’s voters defied freezing weather to vote in a parliamentary election Sunday to form a new government amid the coronavirus pandemic, an economic downturn and stalled negotiations with wartime foe Serbia. Some 1.
Feb 14, 2021 12:14 PM By: Canadian Press 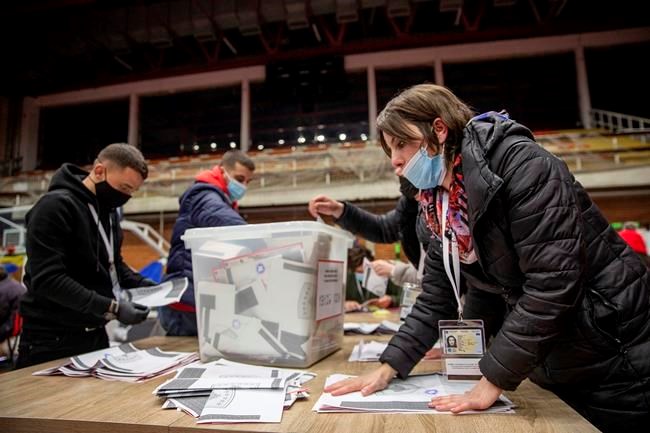 PRISTINA, Kosovo — Kosovo’s voters defied freezing weather to vote in a parliamentary election Sunday to form a new government amid the coronavirus pandemic, an economic downturn and stalled negotiations with wartime foe Serbia.

Some 1.8 million voters were eligible to chose 120 lawmakers among more than 1,000 candidates from 28 political groups and few irregularities were reported. Some 100,000 Kosovars abroad were also eligible to vote by post. Those infected with coronavirus could vote through mobile polling teams.

Voting with a preliminary turnout of 47%, which is more than 2 percentages higher than the last election in 2019, according to the Central Election Commission. The commission hopes to give preliminary results about midnight (2200 GMT).

“Today Kosovo showed how elections should be held, despite the many challenges it faced,” said Valdete Daka, election commission chief.

Voters defied minus 10 degrees Celsius (14 Fahrenheit) temperature and snowfall to cast their ballots.

A new Cabinet will face the challenge of bringing the poor country’s economy back on its feet and reducing unemployment after battling back the pandemic, as well as fighting organized crime and corruption.

Albin Kurti of the left-wing Self-Determination Movement party called on people to “exercise their right to vote.”

“A lot of challenges lie ahead. But we are hopeful that we are going to have high turnout and a great result for the democracy," Kurti told The Associated Press.

He and acting Prime Minister Avdullah Hoti of the -right Democratic League of Kosovo, were the two main contenders for the post of prime minister.

Kurti's supporters started celebrating in some cities even ahead of the results.

Negotiations on normalizing ties with Serbia, which stalled again last year after talks brokered by the U.S. and the European Union, have not figured high on any party’s agenda.

The election was scheduled after Kosovo’s Court rendered invalid a vote by a convicted lawmaker who helped confirm Hoti’s Cabinet named in June after Kurti was removed as prime minister.

Kosovo's Serb minority has 10 seats in parliament and 10 other seats belong to other minorities.

The European Union sent monitors to watch the vote.

Kosovo declared independence from Serbia in 2008, a decade after a brutal 1998-1999 war between separatist ethnic Albanian rebels and Serb forces. The war ended in June 1999 after a 78-day NATO air campaign drove Serb troops out and a peacekeeping force moved in.

Most Western nations have recognized Kosovo, but Serbia and its allies Russia and China do not. Tensions over Kosovo remain a source of volatility in the Balkans.

Within two months of taking their seats in parliament, Kosovo’s lawmakers must elect the country’s president. If no candidate is elected after three rounds of voting, the country might see an early presidential election.

US traffic deaths spike even as pandemic cuts miles travelled
Mar 4, 2021 3:16 AM