CALGARY — Infectious disease experts say it makes sense for Alberta to stretch the amount of time between first and second doses beyond what's spelled out on the labels of the two approved COVID-19 vaccines.
Jan 13, 2021 4:11 PM By: Canadian Press 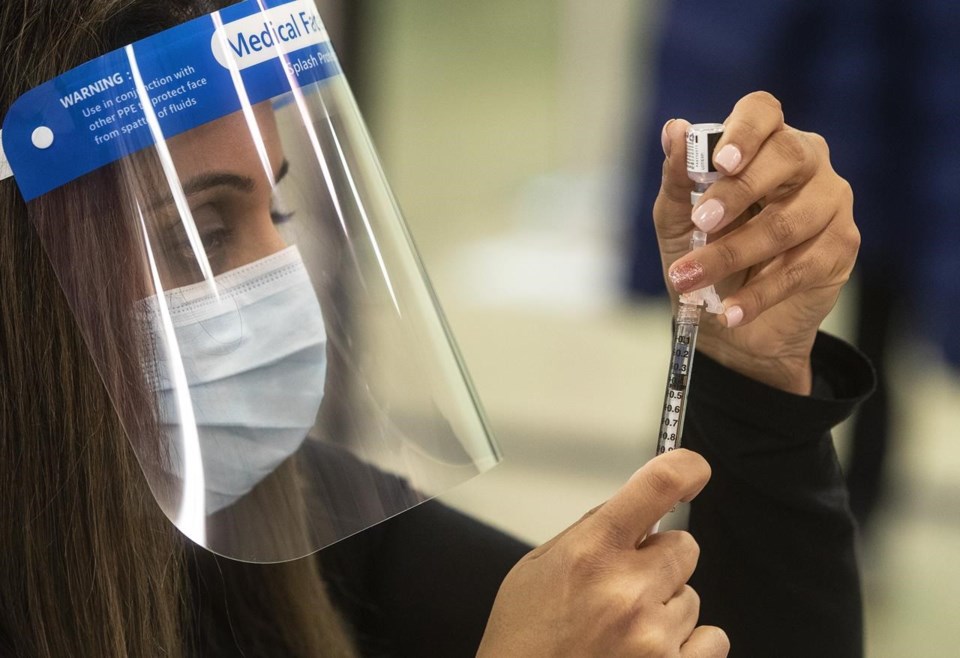 CALGARY — Infectious disease experts say it makes sense for Alberta to stretch the amount of time between first and second doses beyond what's spelled out on the labels of the two approved COVID-19 vaccines.

Dr. Lynora Saxinger, associate professor with the University of Alberta's Department of Medicine, called the move "completely justifiable," though she understands why some people are worried that the practice hasn't been studied.

The Pfizer-BioNTech vaccine's label says doses should be given 21 days apart and Moderna's calls for a 28-day gap.

Dr. Deena Hinshaw, Alberta's chief medical officer of health, said Tuesday the province is allowing doses to be booked up to 42 days apart, though long-term care residents will still receive theirs in the shorter window.

She said it wasn't an easy decision.

"If we were to save half of every vaccine shipment for those who need a second dose, we would be dramatically reducing the total number of Albertans who could benefit from the early protection," she said.

The National Advisory Committee on Immunization says prolonging the wait to 42 days is acceptable in places where there's high community transmission, strain on the health-care system and limited vaccine supply — as is the case in Alberta.

Health Minister Tyler Shandro said Wednesday on Twitter that due to a shortage of supply, about 2,000 planned vaccinations for continuing care residents did not happen this week. The number of available appointments was also reduced in some areas.

There were 820 Albertans hospitalized with COVID-19 as of Wednesday, including 137 in intensive care. There were also 875 new cases detected over the past day and 5.3 per cent of tests came back positive.

Kellner, who is part of the national COVID-19 Immunity Task Force and also advises on provincial panels, said the longer timeline would be "reasonable" until the end of February, when Ottawa expects to significantly ramp up deliveries to the provinces.

But he said it's not something he'd recommend doing indefinitely without further evidence.

Saxinger said while there's little direct evidence about altering the vaccine dose schedule, experience with other vaccines suggests it's not a problem. In some cases, immune responses benefit from a longer wait, she said.

"You have a bit of a more mature memory response to it."

Data suggest both approved vaccines are 92 per cent effective two weeks after the first doses, but it's not clear how long that protection lasts.

After a second dose, protection rises to 94.5 for the Pfizer-BioNTech vaccine and 94 per cent with the Moderna one.

Saxinger added that on average, antibody levels from the first dose are about four times higher than in those who recovered from COVID-19.

"Those things together are pretty reassuring," she said, adding it's "extremely" unlikely antibody levels that high would drop quickly in a matter of weeks.

She said modelling has been done of different scenarios.

"How many lives do you save if you give more first doses and circle back with the second dose, versus going for the very strict time schedule that's been studied more thoroughly?" she said.

"All the models have shown that you save more lives with a bit of flexibility on the second dose timing."

Health officials in Manitoba and Saskatchewan said they're sticking with the time frame set out on the vaccine manufacturers' labels for now. British Columbia plans to give the second shots 35 days later. Quebec has not set out a timeline for its follow-up doses.