Variant-hunting researchers on the cutting edge of B.C.'s race against COVID

Researchers in B.C.'s Centre for Disease Control identified the first case of coronavirus in B.C. A year later, they are tracking new virus "variants of concern."
Feb 9, 2021 1:31 PM By: Jane Seyd 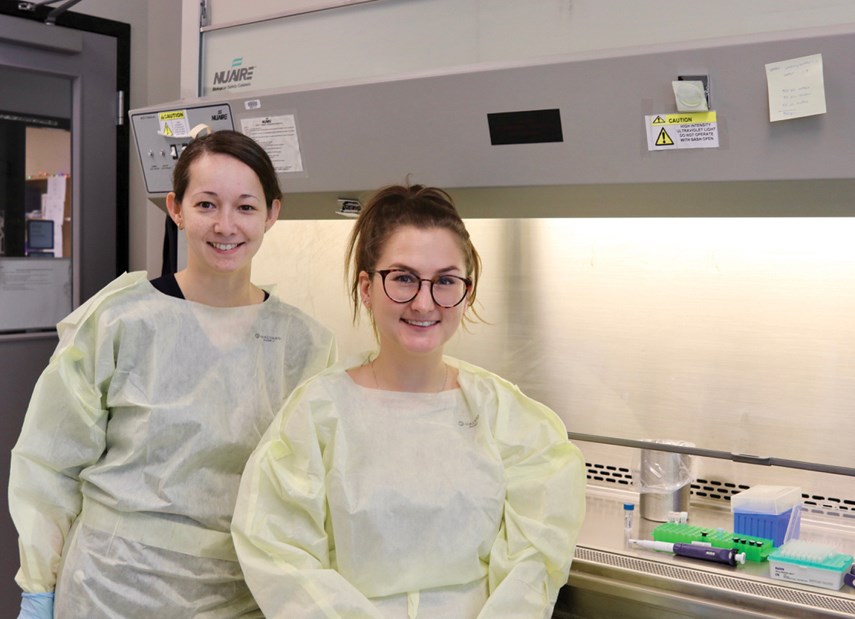 In the race to find and contain new variants of the coronavirus, two super sleuths in a lab at B.C.’s Centre for Disease Control are on the virus-tracking front lines.

North Vancouver’s Rebecca Hickman, 31, a Handsworth grad, and Burnaby’s Tracy Lee, 41, who grew up in Richmond and graduated from McRoberts Secondary, are among the researchers at BCCDC, chasing the virus at the molecular level.

Their current mission: to develop rapid testing that will allow laboratories to quickly identify COVID “variants of concern” – mutations of the virus that transmit much more easily and may prove more resistant to vaccines. Tracking those variants could be key to whether B.C.’s pandemic shows signs of abating or suddenly turns for the worse.

Hickman and Lee are colleagues in BCCDC’s molecular microbiology and genomic sequencing lab, where they create tests to hunt for viruses like COVID and make sure those tests are accurate.

They do that primarily by hunting for the virus’s DNA or RNA – tiny building markers in the virus’s gene code.

When the new strain of a coronavirus in China began making waves around the globe a year ago, there were no existing tests to detect it.

“Nobody in the world knew how to do this,” said Lee. “We were all starting from the beginning.”

Nobody really knew what the virus was, she said. “They had guesses but we didn't actually know whether or not it was a coronavirus,” recalled Lee.

When scientists in China released the information on Jan. 11 last year, Lee immediately set to work, coming up with her first test just two days later – ahead of the World Health Organization.

Lee designed four tests in total and “only one of them worked,” she said.

The team then set about making sure the test was accurate – a process that usually takes about three months. With COVID, Hickman and Lee finished the job in three weeks.

As a research scientist who works in microbiology, Hickman said she’s used to seeing alerts about strange new viruses and bacteria. With COVID, it was clear early on it was going to loom large in her job but, “I think it took a really long time for me to realize it was going to personally affect my life outside of work,” she said.

“I think it took me till maybe even mid-February, before I realized that this was going to be a big deal in Canada.”

Hickman said she had done fewer than 100 tests on travellers returning with symptoms from overseas – all with negative results – when everything changed on Jan. 27 last year.

The way the polymerase chain reaction (PCR) test works, “If the DNA that we’re looking for is there (in the test sample) it fluoresces and the machine detects it,” said Hickman. That shows up as a curve on the computer screen.

On Jan. 27, Hickman was watching the results come in when something started to change – the curve was going up.

Lee was in a meeting with several doctors when Hickman called to report the news.

“I turned around and within seconds there were five doctors behind me staring at the screen,” said Hickman.

Over the summer, while case counts declined and much of the province took a breather, Hickman and Lee were busy working on their next big project – to test the whole genome sequencing that detects variants of COVID-19. That's the test that’s now being run on any samples that come back positive from international travellers.

The big drawback: the process takes time. And in a race against the variants, that is something in short supply.

Now, the pair are working on a new type of “rapid test” that will be able to detect “variants of concern” – particularly the U.K., South African and Brazilian variants – at the same time as determining if a test is positive for COVID-19. When it’s finalized, that test is expected to dramatically speed up the process of hunting the variants.

Developing the tests for COVID-19 has been “an incredibly proud moment for us,” said Lee. “It’s not likely to happen again in our lifetime.”

“I call it the lab Olympics,” added Hickman. “We trained for this. We prepared our whole lives for this and we got a gold medal.”

Both researchers started that training early.

“I've always wanted to be a scientist. Definitely since I had to tell my kindergarten teacher what I wanted to be when I grew up,” said Hickman.

In high school she took social studies in summer school so she could take all three science courses – biology, chemistry and physics – during the regular school year.

She credits her Grade 12 biology teacher at Handsworth, Briar Ballou, for fostering her interest in science.

Lee also credits a high school science teacher, Doug Sheppard – now the superintendent in Delta – for introducing students to science that was outside the regular curriculum. “We actually did microbiology in high school,” she said.

After university, both Lee and Hickman worked (at different times) in a research lab at B.C. Children’s Hospital before joining the BCCDC.

Work in the lab is “never boring” said Hickman, but both researchers admit having attention focused on their work is a novel experience.

“Typically, lab techs do not get much attention,” said Hickman. “It’s been nice for people to finally understand what we do. ... I’d like to think we’ve made a pretty positive impact on a very difficult situation.”