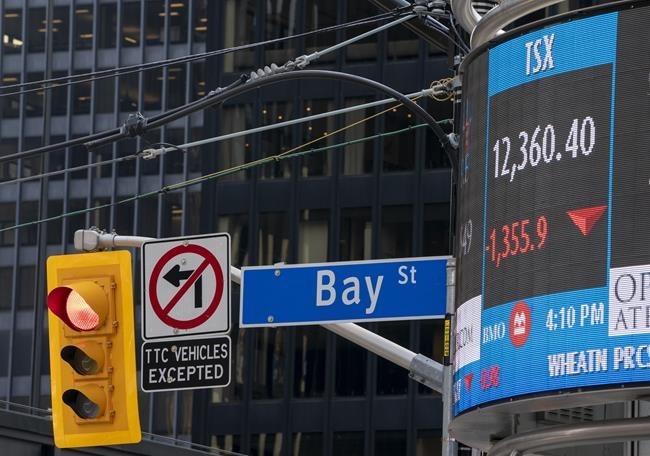 With a lack of news to drive activity, movement was mainly due to elevated political anxiety after last week's riots in Washington, D.C., said Craig Fehr, investment strategist at Edward Jones, with additional concerns about COVID-19 vaccine distribution and expectations of additional fiscal stimulus.

"You're just seeing markets react a little bit more to the fact that equities are coming off record highs last week and even strong markets with an optimistic outlook are going to take breathers periodically," he said in an interview.

"I would look at today as just a day where markets are taking a pause."

Health care was the lone TSX sector to climb, gaining 3.4 per cent led by CRONOS Group Inc., which rose nine per cent.

Ten of the 11 major sectors fell, led by materials, industrials, and technology.

Industrials lost 1.1 per cent with Canadian Pacific Railway down 2.8 per cent and Air Canada off two per cent.

The U.S. technology sector faced some weakness as large tech names including social media firms suffered backlashes after President Donald Trump's accounts were shut down by Twitter and Facebook.

In Canada, technology was down one per cent with Docebo Inc. dropping 8.4 per cent.

Energy was also lower despite a slight increase in crude oil prices amid ongoing worries about global demand because of the coronavirus pandemic. Whitecap Resources Inc. dropped 2.4 per cent, followed by MEG Energy Corp at 1.8 per cent.

"There is an expectation for a pretty robust and sustained global rebound but as we advance the demand story is still going to remain a key driver of crude oil prices," said Fehr.

The Canadian dollar traded for 78.20 cents US compared with 78.71 cents US on Friday.

Fehr believes the pace of vaccinations and prospects of more severe lockdowns will influence market movements this week ahead of U.S. banks reporting fourth-quarter earnings beginning on Friday.

"Today notwithstanding, the market has been willing to look past some of the rough patches in the economic that have been driven by these lockdowns to the expectation that a post-vaccine [recovery] will be rather robust."

This report by The Canadian Press was first published Jan. 11, 2021.