TORONTO — The head of Cineplex Inc. is ready to turn Canada's multiplexes into temporary COVID-19 vaccination sites.
Feb 11, 2021 3:12 PM By: The Canadian Press 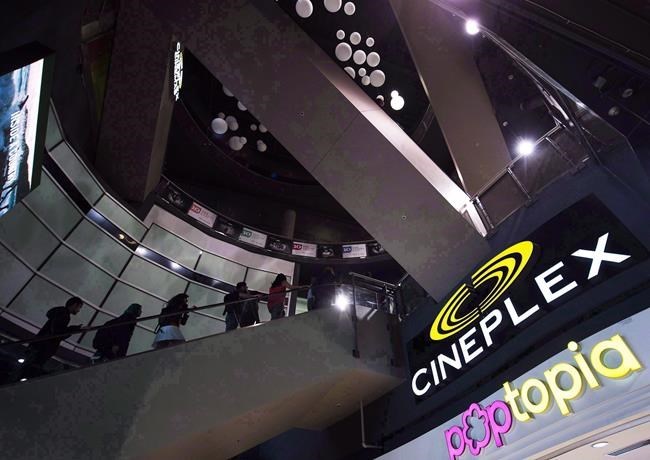 Ellis Jacob, CEO of the country's largest movie theatre chain, says he's reached out to provincial public health agencies nationwide to suggest his company "could help in a big way" as a space for distributing shots.

In Ontario, those talks have also involved Premier Doug Ford, Jacob said Thursday in an interview.

And while no decisions have been made, Jacob says health leaders seemed "very interested and receptive" to the idea.

With Cineplex's locations largely closed across the country, the theatre chain is looking for options as it grapples with a massive shutdown due to COVID-19 restrictions.

The company reported a steep fourth-quarter loss of $230.4 million on Thursday for the period ended Dec. 31, and with no guarantees for any semblance of a summer movie season, the months ahead are hardly certain.

Plans for vaccination sites are still very much in flux too, as officials balance vaccine availability and provincial approvals with choosing locations that make logistical sense.

Loblaw Cos. Ltd.-owned Shoppers Drug Mart and other pharmacies are among companies seeking approval as mass vaccination sites.

But preliminary plans for a vaccination rollout have been hampered by supply setbacks.

In Toronto, for example, a massive clinic was opened at the Metro Toronto Convention Centre in January before it was shut down two days later due to vaccine shortages.

Jacob says once vaccination distribution picks up, he believes Cineplex theatres in smaller markets could be especially helpful because they're spaces that can accommodate people "all the time" and are familiar to local residents.

"Most people know their local theatres so it makes it easier than somebody saying, 'Hey, come to this particular place,' which they've never heard of," he added.

"So I think we could ramp it up and get going in a couple of days, as long as we know what they need and what the conditions are."

Only about 15 per cent of Cineplex's network of 161 cinemas will be open under limited capacity restrictions as of Friday, according to company representative Sarah Van Lange.

Cineplex's Nova Scotia locations will all reopen, as will Ontario theatres in Kingston and Belleville, showing recent releases such as "Wonder Woman 1984" and Denzel Washington crime drama "The Little Things."

Beyond that, the company is waiting for the go-ahead from provincial leaders.

But Cineplex highlighted in its financial results what it called an "inconsistent" vaccine rollout that's playing out across Canada. The country is falling well behind the delivery of doses in the United States, and it raises many questions for exhibitors about the road ahead.

One of the biggest is whether major U.S. markets, such as New York and Los Angeles, may begin to reopen in the spring. That could lead a revenue-starved Hollywood to roll out its delayed movie titles before Canadian cinemas are back in business across the entire country.

If that were to happen, that would put Cineplex and other Canadian theatres at a major disadvantage, especially if anticipated hits such as Marvel's "Black Widow" and the latest "Fast & Furious" entry stick to their planned release dates in May.

"We feel it will put us in a great position, once we get reopened, as long as the gap between the U.S. and Canada is not too significant," Jacob told investors on the financial results conference call, taking a rosy outlook on the situation.

But the prospects of another difficult year continue to linger, particularly in the company's stock price.

Cineplex closed nine cents higher at $11.22 per share on the Toronto Stock Exchange. It's off a 52-week low of $4.32 a share, but a far reach away from the peak of around $34 touched last February before the pandemic.

Earlier this week, Cineplex announced that it reached a deal with its lenders to further amend its credit agreement, in hopes of pushing through the COVID-19 uncertainty.

It's also made several other business decisions to help its finances.

One of them was giving up roughly 17 per cent of its 50-50 stake in the Scene loyalty program to Scotiabank, as part of an extension of their existing partnership. The agreement, valued at $60 million when it was announced in December, reduced Cineplex's holdings in the Scene program to 33 per cent.

The company also sold its Toronto headquarters in a leaseback agreement that shored up $57 million to repay debt.

This report by The Canadian Press was first published Feb. 11, 2021.