TORONTO — May 2020 was a stressful time for Vancouver thrift-store owner Portia Sam as she prepared to reopen from the first wave of pandemic related retail shutdowns.
Feb 17, 2021 12:06 PM By: The Canadian Press 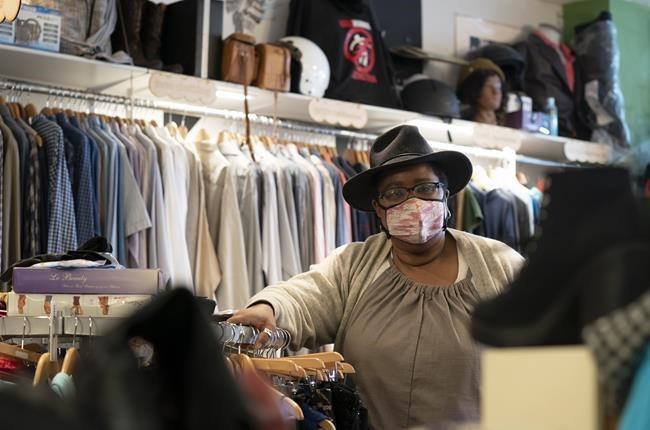 TORONTO — May 2020 was a stressful time for Vancouver thrift-store owner Portia Sam as she prepared to reopen from the first wave of pandemic related retail shutdowns. Thinking about the health risks of COVID-19 left her so anxious she sometimes found herself shaking.

Then, George Floyd was killed by police in Minneapolis. Sam's 20-year-old daughter was involved with the Black Lives Matter movement and Vancouver businesses talked of boarding up their windows after seeing the protests in the U.S. Sam had been ramping up Miscellany Finds’ social media activity during the lockdown period, but amid a surge of interest, now struggled to find the right words for her customers.

"I was enraged. For two months, I couldn't talk to people. I just did my work," says Sam of Floyd's killing and the protests.

Sam recalls receiving some touching offers of support from donors and customers, but she was already spread thin from the pandemic, the store, and the social enterprise job retraining program she runs there.

"My feelings were much too complicated," she says. "I couldn't dissect them bit by bit."

Like Sam, many Black entrepreneurs The Canadian Press spoke with said the past year has been a particularly emotional one.

In interviews, Black business owners said they wanted to take advantage of a new customer base pledging to #BuyBlack, but as well as long work days and a spike in potential clients, they were also confronted with feelings that did not fit neatly into a hashtag: anger that outrage over police brutality hadn’t come sooner; reminders of local casualties of police brutality; discomfort with being tokenized or pitied; annoyance that the many immigrant communities of Black people were being painted with the same brush; and skepticism over whether the large corporations that had signed anti-racism pledges would follow through.

At the same time, many also described being grateful for a surge of tangible support from their communities in terms of social media followers and more importantly, customers.

On June 10, the Canadian Council of Business Leaders Against Anti-Black Systemic Racism launched the BlackNorth initiative to boost Black representation in corporate leadership. Between June 4 and July 6, Uber Eats orders from Black-owned restaurants in Toronto rose 183 per cent, the company said. Between May 31 and June 6, Google searches for "Black-owned business" surged to all-time highs in Canada.

While search interest has remained higher than it was before, it has died down considerably since last summer. Meanwhile, the pandemic – and its catastrophic effect on businesses – has raged on. A recent note from TD Economics said that the pandemic has widened inequality, noting that visible minorities have an unemployment rate of 9.9 per cent in Canada, compared with 7.2 per cent for non-visible minorities.

Nevell Provo, founder and CEO of Nova Scotia-based Smooth Meal Prep and R&amp;B Kitchen, says it is promising that the intention to promote Black-owned businesses is strong, but the key is finding long-lasting ways to put that goodwill into action.

"Maybe on the first day or the first week, you're getting some different calls. I was in a lot of different social media posts of, 'What are the Black businesses in Nova Scotia?' We're getting tagged left, right and centre," says Provo.

"They might come get a meal one day or search on the site, but they might not be our customer. It's a false hope, a head fake, for Black business owners.”

Provo says these types of customers are less likely to become regulars since they aren’t choosing a product that fits a specific need, and it isn’t easy to predict whether the spike in interest will last. “One week where the orders are up, you start ordering inventory,” he says.

“Then these people go back to their regular lives."

Directories like ShopBlackOwned.ca have since expanded, and Provo says that as his own business becomes more visible, it has inspired other Black people to reach out and become entrepreneurs. But Provo says he knows that many will still face systemic issues, like predatory lending practices that make it hard to build good credit, or lenders that seem to doubt even the most conventional businesses owned by Black people.

Michael Pinnock, treasurer of the Black Business and Professional Association, says the wider Canadian community rallied last year to support the association, and it received a "tremendous" wave of financial support. While Pinnock is hoping the support lasts, his organization has a plan to stretch the funds for the long-term.

"It's a continuing process. Barbershops and salons and small businesses are still being affected ... A lot of our folks are working right now in smaller restaurants," says Pinnock. "It's probably going to get worse, because a lot of folks got hit big time with the first wave of the pandemic ... we're just finding ways to persevere."

The BBPA created an investment program where recipients of grants are encouraged to donate the sum back to the association once the business is profitable.

"CanadaHelps — where we get a lot of our donations from the ordinary, average person — that has been steadily and actually increased during the pandemic. Between July and October, corporate Canada did step up and did a lot for us," says Pinnock.

"One of the key, foundational things for us for many, many years is self-reliance and sustainability. What that means is when you get a government grant, most of the time that’s one-off contribution. When you use it to deliver services, it's not an investment. At the end of the grant, you are back to where you started. What we have done is taken all these donations and contributions, made them into investments in the community."

Nana Osei, chief executive and co-founder of Bohten Eyeglasses, says their company has seen first-hand how difficult it can be to navigate the fundraising environment as a Black-owned business. Osei says Black-owned businesses would be better positioned if there was more mentorship on financing issues, as well as more transparent information widely available about the fundraising process.

Osei says that Bohten, for one, has seen the business momentum stay strong and gained repeat customers after the #BuyBlack movement last year. While the pandemic brought new challenges, Bohten says his past struggles as a Black business owner have prepared him to keep fighting for his business.

"Over the years, we've been very resilient— just understanding what it really takes to grow a business when the odds are really stacked against you, says Osei.

This report by The Canadian Press was first published Feb. 17, 2021.