LAS VEGAS — Sheldon Adelson, the billionaire mogul and power broker who built a casino empire spanning from Las Vegas to China and became a singular force in domestic and international politics has died after a long illness.
Jan 12, 2021 7:04 AM By: The Canadian Press 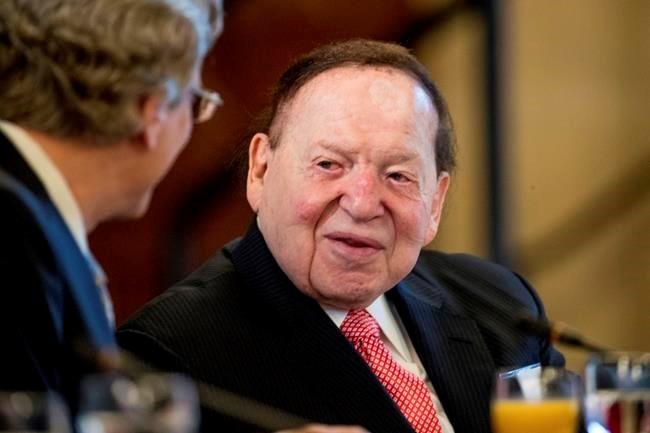 LAS VEGAS — Sheldon Adelson, the billionaire mogul and power broker who built a casino empire spanning from Las Vegas to China and became a singular force in domestic and international politics has died after a long illness.

He was the son of Jewish immigrants, raised with two siblings in a Boston tenement, who over the second half of his life became one of the world’s richest men. The chairman and CEO of the Las Vegas Sands Corp. brought singing gondoliers to the Las Vegas Strip and foresaw correctly that Asia would be an even bigger market. In 2018, Forbes ranked him No. 15 in the U.S., worth an estimated $35.5 billion.

“If you do things differently, success will follow you like a shadow,” he said during a 2014 talk to the gambling industry in Las Vegas.

Blunt yet secretive, the squatly-built Adelson resembled an old-fashioned political boss and stood apart from most American Jews, who for decades have supported Democrats by wide margins. Adelson was considered the nation’s most influential GOP donor over the final years of his life, at times setting records for individual contributions during a given election cycle.

In 2012, Politico called him “the dominant pioneer of the super PAC era.”

Adelson regularly hosted the party’s top strategists and most ambitious candidates at his modest office, wedged among the casinos on the Strip. Throughout, he helped ensure that uncritical support of Israel became a pillar of the GOP platform, never more visibly demonstrated than when the Trump administration relocated the U.S. embassy from Tel Aviv to Jerusalem in 2018.

The inflammatory move had been adamantly opposed by Palestinians and was long a priority for Adelson, who had even offered to help pay for it, and for the Republican Jewish Coalition, of which he was the primary benefactor. Adelson and his wife, Miriam, were front and at the ceremony in Jerusalem.

More recently, he reportedly purchased the U.S. ambassador’s official residence near Tel Aviv for some $67 million in a move that was seen as helping prevent the embassy from relocating back to Tel Aviv after Trump leaves office. Just weeks ago, Adelson provided a private plane for Jonathan Pollard, a former U.S. intelligence analyst who spent 30 years in prison for spying for Israel, to move to Israel after his parole ended.

When asked at a gambling conference what he hoped his legacy would be, Adelson said it wasn’t his glitzy casinos or hotels, it was his impact in Israel. He donated $25 million, a record sum for a private citizen, to Israel’s Yad Vashem Holocaust Memorial. He established a in Jerusalem. He was closely aligned with the conservative Likud party and funded a widely-read free daily newspaper called “Israel Hayom,” or “Israel Today,” so supportive of Prime Minister Benjamin Netanyahu that some Israelis nicknamed it “Bibi-ton.”

In the U.S., Adelson helped underwrite congressional trips to Israel, helped build a new headquarters for the lobbying group the American Israel Public Affairs Committee (AIPAC) and later was a top supporter of the Israeli-American Council, whose conferences have attracted top Republicans ( Mike Pence) and Democrats (House Speaker Nancy Pelosi). He sponsored “Birthright” trips to Israel for young Jewish adults that were criticized by some participants as intolerant of opposing views.

His attachment to Israel was life-long and so deep that he once said he wished his military service had been in an Israeli uniform instead of an American one.

Israeli Prime Minister Benjamin Netanyahu said Tuesday that Adelson “will forever be remembered” for his work strengthening ties between the U.S. and Israel.

Adelson was a late bloomer in business and in politics. He didn’t become a casino owner, or a Republican, until well into middle age. Through the 1990s and after his wealth soared and his engagement in politics intensified. He was a supporter of President George W. Bush and backed Republican Rudolph Giuliani for the 2008 presidential race, before turning to the eventual candidate, Sen. John McCain, who lost to Barack Obama.

“Sheldon battled his way out of a tough Boston to build a successful enterprise that loyally employed tens of thousands - and entertained millions," said Bush in a prepared statement Tuesday. “He was an American patriot and a strong supporter of Israel.”

Adelson's leverage grew considerably in 2010 after the Supreme Court’s “Citizens United” decision lifted many restrictions on individual campaign contributions. He and his wife spent more than $90 million on the 2012 election, funding presidential candidate Newt Gingrich and later Mitt Romney, who also lost to Obama.

“I’m against very wealthy people attempting to or influencing elections,” he told Forbes magazine in 2012. “But as long as it’s doable I’m going to do it.”

Adelson came around slowly to Trump, who during the campaign had said he would be “neutral” in negotiations between Israel and the Palestinians. Trump even ridiculed his initial liking for Sen. Marco Rubio of Florida, tweeting in 2015, “Sheldon Adelson is looking to give big dollars to Rubio because he feels he can him into his perfect little puppet. I agree!” Adelson eventually endorsed Trump, but remained hesitant through much of 2016. He gave more than $20 million in the final weeks of the campaign after reports that he would contribute $100 million, and was more generous with congressional races.

But after Trump’s surprise victory, the new president spoke often with Adelson and embraced his hardline views on the Middle East. He cut funding for Palestinian refugees and withdrew from the Obama administration’s nuclear nonproliferation deal with Iran. He moved the U.S. embassy to Jerusalem even though earlier administrations — Democratic and Republican — avoided doing do because it directly challenged the Palestinian view that the ancient city should be part of any peace agreement.

Adelson, in turn, aided Trump financially, including $5 million for his inauguration, and supported him through his media holdings. Late in 2015, Adelson secretly purchased the Las Vegas Review-Journal — the paper’s own reporters revealed he was the new owner — and soon raised concerns he was imposing his own views. Some longtime staffers left in protest.

In what was widely seen as a mark of the Adelsons’ influence with Trump, Miriam Adelson was given a Presidential Medal of Freedom in 2018.

Adelson, who contributed more than $100 million to the 2018 off-year elections, held extraordinary power among Republicans even though he didn’t always agree with them.

“Our nation lost a remarkable American with the passing of my friend Sheldon Adelson," said Senate Republican leader Mitch McConnell.

In a 2012 interview with The Wall Street Journal, he called himself “basically a social liberal,” pro-choice on abortion and supportive of immigrant rights. He cited taxes and differences over Israel as major reasons for leaving the Democratic party.

“His life made him a fearless advocate for freedom and entrepreneurship and a source of counsel and support to a generation of conservatives, including me,” said House Minority Leader Kevin McCarthy, R-Calif.

In Nevada, his influence was such that even the state’s most prominent Democrat, Sen. Harry Reid, hesitated to take him on. In a 2014 interview with MSNBC, the then-Senate majority leader differentiated between Adelson and fellow GOP billionaire donors Charles and David Koch. Reid had sharply criticized the Koch brothers as callous and greedy, while saying that he respected Adelson because he was “not in it to make money,” a widely challenged opinion.

He had previously told MSNBC’s Rachel Maddow that he remained friends with Adelson despite their political differences.

“Sheldon Adelson and I still meet and have conversations. He has a problem, I try to help him,” Reid said.

Adelson was married twice. He and his first wife, Sandra, were divorced in 1988. Three years later, he married Miriam Farbstein-Ochshorn, an Israeli-born doctor he met on a blind date and whom many believe helped deepen his involvement with Israel. Their honeymoon trip to Venice inspired Adelson to raze the historic Sands hotel-casino, once a hangout for Frank Sinatra among others, and replace them with a pair of massive complexes: The Venetian and The Palazzo, one of the city’s tallest buildings.

Sheldon Adelson adopted his first wife’s three children and had two children with his second wife. Among numerous philanthropic projects, he and Miriam Adelson were especially committed to the research and treatment of substance abuse, a personal cause for Sheldon Adelson. His son Mitchell, from his first marriage, died of an overdose in 2005. (Sheldon Adelson would spend millions opposing state efforts to legalize marijuana).

Sheldon Garry Adelson was born in 1933, in the Dorchester of Boston. His father was a taxi driver, his mother the manager of a knitting store. A natural entrepreneur, he was selling newspapers by age 12 and running a vending machine business at 16. After dropping out of City College of New York and serving in the Army, he attempted to start dozens of businesses, from toiletries to de-icing windshields.

Adelson, who said he disdained email, began to amass his fortune with a technology trade show, starting computer convention COMDEX in 1979 with partners before selling his stake in 1995 for more than $800 million.

When he bought the Sands Hotel in 1989, he was thinking convention space, not just gambling, would make money. It did. He built a convention hall to keep his hotel rooms full on weekdays and others soon followed the business model. Meanwhile, his effort to replicate the Strip in Macao, the only place in China where casino gambling is legal.

When faced with water and marsh land, Adelson directed his company to build land where there wasn’t any, piling sand up to create the Cotai Peninsula. Soon his Macao revenue outstripped that of his Las Vegas holdings. He later expanded his business to Singapore, where his Marina Bay Sands hotel and its infinity pool were featured in the hit film “Crazy Rich Asians,” and had been pressing to open a casino in Japan.

His Macao business also spawned a long-running wrongful termination lawsuit brought by a former chief of Sands China Ltd. who accused Adelson and the company of firing him for exposing a host of misdeeds. Adelson often clashed with attorneys while appearing on a Clark County courtroom’s witness stand.

The Sands China lawsuit was among dozens involving Adelson, whose cases included his suing a Wall Street Journal reporter for calling him “foul-mouthed” (the parties settled, the words remained) to being sued by his sons from his first marriage for cheating them out of money (he won).

A long-running feud with fellow casino tycoon Steve Wynn turned to friendship when Wynn joined Adelson’s effort to end online gambling. Critics said Adelson was trying to stifle competition. Adelson countered that there was no way to ensure children and teenagers wouldn’t gamble and said he was “not in of it exploiting the world’s most vulnerable people.”

Trump’s election would again prove useful to Adelson. During the Obama administration, the Justice Department said online gambling that does not involve sporting events would not violate the Wire Act, a 1961 federal statute. In a legal opinion that became public early in 2019, the department reversed itself and decided the statute applies to any form of gambling.

Josef Federman contributed to this story from Jerusalem, and Tia Goldberg from Tel Aviv, Israel. Zeke Miller and Alan Fram contributed from Washington.